When should you go to Colombia? Climate by region

When should you go to Colombia? Climate by region

When you start planning a trip to Colombia, one of the first things you ask is when to go.

Colombia covers 1,141,748 square kilometres, making it about the same size of France, Spain and Portugal all put together. Positioned between the equator and the Tropic of Cancer, it enjoys a tropical climate. Thanks to it mountain ranges, the country has an impressive variety of landscapes and climates, from humid jungles to tropical plains, deserts and permanent snow cover. The climate in Colombia isn’t linked to the seasons we’re familiar with in Europe, but depends on locations’ altitudes above sea level. So, when should you go to Colombia? All year round. It’s true. Keep reading and we’ll explain more.

As we said at the start, a place’s temperature depends on its altitude above sea level. Here’s an image to explain: 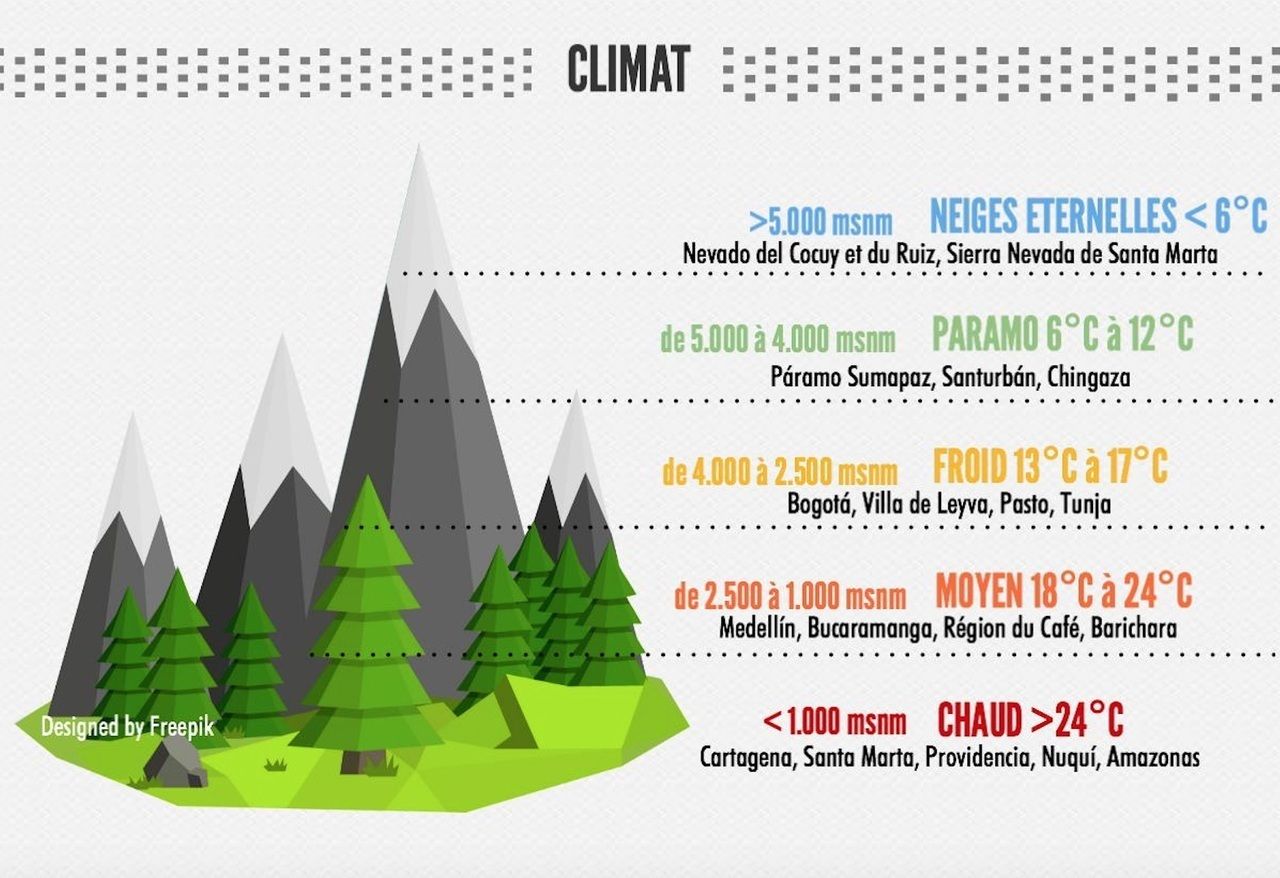 This means the higher you go into the mountains, the colder it will be. Meanwhile, the closer you get to the sea, the warmer it gets.

There are better months to visit different regions. Here’s when to go to Colombia by region:

When should you go to Medellín, Bogotá, Bucaramanga, San Gil and the coffee region?

If you really want to avoid the rain, avoid April and November. December and January are traditionally thought of as the dry period. That said, 15th December to 15th January is the country’s high season and the Colombians all go on holiday.

When should you go to the Colombian Amazon?

February to May is the rainy season when it’s warmer, the animals are especially active and the rivers become navigable.

From June to September, it’s the dry season and water levels are high. All the rivers are navigable and the isolated islands can be reached. It’s the first spring, plants bloom and some animals reproduce. The creatures scatter and it’s harder to see them. This is generally thought to be the best season to visit.

From October to November, it’s the dry season with water levels reducing to reveal sandy beaches. It’s warmer and the animals gather together in any remaining water, making them easier to spot.

From December to January: the second spring and the first rains arrive. There’s an explosion of life.

When should you go to Nuquí and Bahía Solano?

When should you go to Cartagena, Tayrona National Park, Santa Marta, San Andrés and Providencia?

The best time to go is the dry season between December and April, then July and August. The rainy season is from May to June and October to November. But don’t worry: it doesn’t rain that often: on average just two hours a day and sometimes at night or early in the morning.

When should you go to the River of Five Colours?

Considered the most beautiful river in the world, Caño Cristales boasts five colours of aquatic algae: yellow, red, green, blue and black. The best time to go to is between June and December. Visits are banned in other months to help protect the algae’s reproductive period.

When should you go to Villavicencio and Menegua Lakes?

In Orinoquía and the Eastern Plains the dry season is from December to March and the rainy season runs from April to November. As in the Amazon, each season is different and has its own charm.

So, when should you go to Colombia?

All year round. Even if you go during the rainy season, it’s a lot drier than it is in Asia, for example. Head for the must-visit locations, archaeological delights and idyllic beaches: there’s something for everyone!

Planning a trip to Colombia?

We’re English-speaking Colombians who are experts when it comes to travelling round our country. We have 100% customisable tours that take you to the real Colombia.View our trip ideas here or contact us: we’ll be pleased to discuss your plans.

Want to know who we are and why you should travel with us? Click here

Previous postTravel tips: Colombia
Next postWhat is the COVID-19 situation in Colombia?

Off the beaten track Tour

Stay at the spectacular Caño Cristales

What is the COVID-19 situation in Colombia?

By continuing to browse this site, you accept the use of cookies. Learn more.