Wondering why you would want to visit Colombia? They say a picture is worth a thousand words, and we agree. So we’ve made a three-minute video to show you five good reasons to visit Colombia

But if you can’t watch the video, keep reading…

Colombia is a new country which people outside it don’t know much about, but it’s becoming increasingly fashionable. Magazines like Vogue (read article here), celebrities like former Miss France Laury Thilleman and French tourism industry publication Tour Hebdo all see the country as one of the most beautiful in South America. So, is it true? Here’s what we think

Coffee and the coffee region

Colombia is famous for the quality of its coffee and it’s often said to be the “best in the world”. Colombian coffee is gentle and sophisticated with an extraordinary intense aroma and “Café de Colombia” has been a European Union Protected Geographical Indication since 2007. While you’re in the country, you’re sure to drink some fantastic coffee. 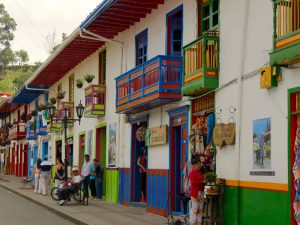 But that’s not all! Coffee is a cornerstone of Colombian culture and more than 11 of the country’s regions are producers. It’s grown on endless hillsides that stretch out as far as the eye can see and are dotted with picturesque, colourful little villages. These landscapes are magnificent and unspoilt. Indeed, in 2011, UNESCO added the Coffee Cultural Landscape of Colombia to its World Heritage List. We can assure you that the region is fantastically exotic. And, as they say in Colombia: “Tomémonos un tinto, seamos amigos” (Let’s have a coffee and be friends).

Colombia lies at the north of South America and is bordered by the Caribbean Sea and Pacific Ocean. The country has over 3000 km of coastline stretching out under the tropical sun with turquoise seas and tens of white sand beaches. Reason two to go to Colombia involves a little detour to one of these beautiful beaches: the Rosario or San Bernardo Islands, the islands of San Andrés and Providencia, Tayrona National Park, Nuquí, Bahía Solano, La Guajira and more… Imagine a tropical paradise: the image in your mind’s eye is just what Colombia looks like!

This old fortified city played a key role in Spanish Empire administration and the slave trade. Today, Cartagena is one of the most beautiful cities in the Caribbean and is often called “the pearl of the Caribbean” or, by the locals, “the Fantastic”. This melting pot of history, culture and charm with gorgeous beaches nearby is a must-visit part of Colombia. What’s more, sheltered by the continent, it is rarely reached by hurricanes and its 25°C to 30°C temperatures are just perfect.

To make you even keener to visit Colombia, we’re going to talk about fruit. Although you’ll have already tried certain exotic fruits, we’re sure you won’t find such a huge variety anywhere else. In Colombia, you won’t only see new things, but can treat your taste buds to new aromas, tastes and flavours. We’ll go into more detail about all these fruits in a future article, but for now we’ll just give you an idea of the long list: guanábana, níspero, borojó, pitahaya, tomate de árbol, granadilla, maracuyá, mangostino, corozo, curuba, carambolo, freijoa, lulo, uchuva and zapote, plus traditional exotic fruit like bananas, pineapples, mangos, papayas, guavas and passion fruit.

The Colombians themselves have got to be the biggest reason to visit Colombia. The first thing you’ll notice when you arrive in the country is how kind the locals are. They’ll welcome you like a friend and you’ll love their hospitality and helpful attitude. They are smiley, endearing and keen to prove that their bad reputation isn’t justified: their zest for life is contagious. They’ll make you feel so at home wherever you go that you won’t want to leave!

Now you know why to go to Colombia, do you want to visit the country?Admit it! We know you DO.

PLANNING A TRIP TO COLOMBIA?

We’re English-speaking Colombians who are experts when it comes to travelling round our country. We have 100% customisable tours that take you to the real Colombia. See our trip ideas here or contact us: we’ll be pleased to discuss your plans.

Want to know who we are and why you should travel with us? ? Click here.

Off the beaten track Tour

Stay at the spectacular Caño Cristales

What is the COVID-19 situation in Colombia?

By continuing to browse this site, you accept the use of cookies. Learn more.